Most times cane is categorized by hardness. Sometimes we see the term density used. Oftentimes hardness and density are used interchangeably to characterize cane. Cane is also frequently identified as having “tight or moderate vascular bundles”. You will also see cane descriptions that describe the sound with subjective terms such as warm, dark, bright, or focused. Color and mottling is also a widely used descriptor.

We are not saying that any of these characterizations are invalid, but for now, and for our purposes, we are going to try hard to steer clear of subjective descriptions and stick to what we can measure and let you decide what sounds good to you.

As far as we have been able to determine, color plays no role in the way the cane functions. The exception is if the cane has a greenish tint which would mean it has not been properly aged. The "golden" color comes from how long the finished pieces have been set in the sun to essentially "tan" This is typlcally for about 10 days or so. The brown mottling on cane is simply a stain from leaves left on the stalk and should not effect cane (usless it is dull and porous).

We do not have a good way of measuring the fiber structure of cane at this time so we do not include this in our cane descriptions.

First off, these are two different physical attributes that can be measured. Secondly they do not necessarily track together. A hard cane is not necessarily a dense cane. We equate hardness with longevity in reeds and how much cane “comes off” when we scrape. These things do make intuitive sense. Again, we will refrain from discussing sound as a function of hardness.

It is not as clear how Density, as a cane characteristic, affects the performance of the reed. We believe that the combination of these two attributes may be a key in a useful characterization of reed cane. If we use metals as an example, you can start to get an idea of how this works. Aluminum is fairly hard, but not very dense. Lead is very soft and very dense. If you can imagine  making reeds out of either of these diverse materials, you start to get the idea.

The following chart shows how these two measurements interact in the cane varieties we currently carry. 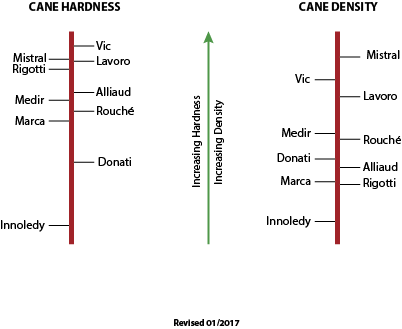 Be careful not to jump to any conclusions too fast. All of these brands can make lovely reeds. It is in our nature to think that whatever is at the top of the chart is what is best. That is not necessarily true. Soft and less dense may be the right combination for you, or something in the middle. We are all different and we live in different climates and elevations, and our reed styles vary. Try our samplers to figure out what may be right for you.

Alliaud is harvested near Sarrians, France. Sarrians is slightly further inland than most other French cane growers. The Alliaud family has been producing cane for reeds for over 50 years. Alliaud has been a popular seller for many years.

Alliaud is medium-hard to hard. It’s density is just slightly lower than average. The tubes are fairly thick walled resulting in fewer than average pieces per pound. Generally we will have 10.5 - 11.0 mm in stock, the 10 - 10.5 is relatively hard come by so grab when you see it in stock.

Donati (aka Silvacane) is grown in the Sauvebonne valley, near Hyères, France. The Donati family has been specialists in reed cane since 1932. Donati is a softer than average and a fairly low density cane. Some of our customers swear by it.

This Ghys cane is harvested from the fields as the historical "Madame Ghys" that has been a favorite of oboists for many decades.

Gonzalez cane comes to us from the largest cane fields in the world, at the foot of the Andes in South America. Gonzalez is new to our lineup and we have not yet measured its characteristics.

Innoledy is grown in the Anhui province in China. Tubes are medium to medium-thin and are generally straight. This cane is our softest and least dense, but do not count this one out. We have made some beautiful reeds with this cane.

K.Ge is a very popular cane from China. K.Ge is on the soft side. Reeds have a warm sound and are stable.

Latium is our first cane grown in Italy. Latium is a new addition that is of medium hardness and slighty less than average density. Latium is very easy to work with. Reeds vibrate quickly and have a nice sound.

Lavoro comes to us from Turkey. It is one of our harder brands and has a higher than average density. Tubes are fairly thin-walled and straight. This cane has not been widely sold in the US. We certainly expect that to change! We have gotten very positive feedback and great reviews on this cane. Try it out in one of our samplers.

Marca hails from Ollioules, in the Var region of France. Marca has been producing cane in this region for over 60 years. This cane is not commonly sold in US, but is more common in Europe. It is of medium hardness and slightly less than average density. Tubes have average wall thickness. This cane is picking up in popularity.

Medir is produced in the Catalonia region of Spain along the Mediterranean. The cane is slightly harder than average and is of medium density. Medir is new to our catalog, but it has a very good reputation.

This is a new cane on the market from the Var region of France. It is grown much closer to the Mediterranean coast than usual. The winds are stronger which affects the cane characteristics. These tubes have the thickest walls of any cane we carry. It also is the densest and one of the hardest. We suggest that you gouge this cane a little thinner. Because of the hardness and density, it takes more scraping to get the reed going. If you have the patience you will end up with a great reed that will last and last.

Rigotti is probably the most widely distributed cane in the world. Rigotti has been producing cane on large plantations in Cogolin, France since 1966. Their cane is of medium density and is medium to medium hard. Rigotti is our most consistent cane and yields a high percentage of usable pieces.

Rouché is grown in the Var region of France near Fréjus. Rouché is a new addition that is of medium hardness and density.

Vic is also grown in the Var region of France near Fréjus and is also a new addition. It is one of our hardest brands and is also quite dense.